I've been playing a wonderful game, 'Eve-Online', for the past year or so now. There really is a lot of variety available in this game, which makes for a game that stays fun for a very long time. Unlike many other MMORPG games, skill training in eve is completely time constrained - skills train whether you are logged on or not, and skill training can't be pushed faster by skill "grinding" that is common on most of the other games. Training times are affected by character attributes, which can be enhanced with implants and learning skills, but of course those cost training time and in-game currency.

Eve has a number of professions to engage in, including mining, manufacturing, trading, mission running, pirate hunting, exploration, and piracy. Of course, most players engage in some combination of these activities, particularly over the life of their character. PVP is an integral part of the game throughout all areas, including the elements that are not typically thought of as PVP. While "empire" space is generally considered safe, there are still plenty of ways for other players to cause problems.

With this to provide some background, future posts about my in-game activities will make a bit more sense, although to really understand much, you really need to join and play the game. The price is very competitive with other games, and with some work, you can actually pay for the game time with in-game currency. Whether you join or not, you can expect to see regular entries about the game and various in-game activities and events.

Have a great week and I hope to see everyone flying around soon! 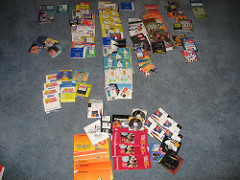 IMG_2587
Originally uploaded by av8or
Of all things to collect, how about those AOL cds. Well... I guess we all have to have our hobbies, right?